The open source Resale Deterred Ticket provides ticket resale deterrence and paperless tickets when incorporated into an existing ticket sales system. In a ticket sales system using this program, entrance permission is assigned to the address on the blockchain given by the ticket purchaser (event visitor), and the entrance permission is confirmed by the only key generated within the device such as smartphone owned by the purchaser. Thus a mechanism to prove entrance permission is achieved. In this way, we believe that the usability of tickets acquired by a route other than the authorized sales agent is impaired and thus act as deterrence of illegal resale.

In addition, Run Rystem, a joint developer of Resale Deterred Ticket, is developing this mechanism for identity verification of online ticket sale of the Vietnam Football Association. If this is put into practical use, the ticket purchaser will be able to verify identity by presenting the QR code with the expiration date on the purchaser's terminal, eliminating the need to register and present an identity card upon receipt of the ticket.
(Each program of GMO Blockchain OSS is built on the basis of Z.com Cloud Blockchain.) 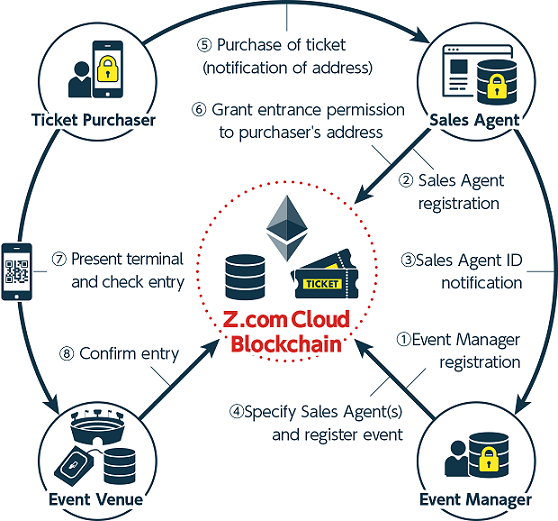 (* 2) This is an example of Resale Deterred Ticket incorporated into an existing ticket sales system. When actually implementing such a system, it is necessary to prepare an application for users, some form of terminal reading at the event venue, etc. with reference to the source of the demo app.

■Open source public page
URL：https://guide.blockchain.z.com/docs/oss/resale-deterred-ticket/
In response to the illegal resale of box office tickets that has recently become a problem, various efforts to prevent resale are under way. However, in selling tickets, there are a lot of stakeholders including the event manager, ticket sales agency, event venue, etc. In addition, there are cases where multiple companies and organizations are responsible for a given role in one event. Therefore, if each party concerned has introduced various ticket resale prevention measures individually, it becomes necessary to adjust the function of preventing resale at each event.
Integrated with an existing system, Resale Deterred Ticket can deter illegal resale by management of entrance permissions on the blockchain, and can realize paperless tickets. Automatic processing is carried out according to the contents of prescribed open logic, so by incorporating this program as a common basis linking tickets and entrance permissions, it is unnecessary to introduce a service prepared by an external company, and an autonomous and neutral entrance authority management mechanism can be achieved.

１）Management of entrance permissions by keys that only ticket purchasers can know
By the logic of Resale Deterred Ticket, entrance permission is given to the address on the blockchain designated by the ticket purchaser. Since only the key paired with the address generated in the terminal owned by the purchaser an be used to prove access rights, only the terminal possessing the key has access permission.
This key only exists in the terminal owned by the purchaser, and it is stored in an area where copying is difficult. In the unlikely event that key is copied inappropriately, it will lose its uniqueness, and ticket purchasers are less likely to be able to enter the event venue (i.e. they are more likely to be rejected).
As a result, we believe that tickets acquired through irregular purchase flow cannot guarantee admission to the key-holder, and the reliability of admission will be impaired, leading to deterring resale of tickets.

2）Easy to introduce both dealers and event venues
The Resale Deterred Ticket that can be implemented with this program is a management mechanism for entrance authority that operates openly, autonomously and neutrally. Resellers and event venues agreeing with this will be able to voluntarily participate in Resale Deterred Ticket.
Based on this program, the ticket sales agent simply incorporates the processes of “acquiring the address of the ticket purchaser” and “granting the entrance permission to the address” into the purchase flow of an existing ticket selling system, enabling the implementation of resale deterred tickets.
The event venue can be used simply by preparing a mechanism to read visitors' terminals (QR codes) locally, check the entrance permissions and record admissions.

■Applied to online ticket sales of Vietnam Football Association
Run System, headquartered in Vietnam and conducting software offshore development, provides an online ticket sales system to the Vietnam Football Association (VFF). Since illegal resale of football tickets is a significant problem in Vietnam, users are required to register and present identification cards when purchasing and receiving tickets. Under these circumstances, there was a demand for a system that simultaneously realized improved user convenience and deterrence of illegal resale.
Run System is developing an application of Resale Deterred Ticket jointly developed with GMO Blockchain OSS to do identity verification of online ticket sales of VFF. If this is put into practical use, the ticket purchaser will be able to do identity verification by presenting the QR code and expiration date on the purchaser's terminal, eliminating the need to register and present the identity card upon receipt of the ticket.

At GMO Internet, we are taking advantage of know-how garnered through working in Internet infrastructure services for more than 20 years. We are currently developing new blockchain based technologies. As part of this, in December 2016 we began offering beta versions of Z.com Cloud Blockchain and ConoHa blockchain services. These can be easily used to build distributed blockchain applications. Such as the Z.com Cloud Blockchain based Home Delivery Box, which has already been developed.
Based on the knowledge gained through such work, in July 2017, GMO Internet launched GMO Blockchain OSS, an open-source project enabling real service deployments. Our aim is to foster and disseminate new services based on blockchain technology.
Under GMO Blockchain OSS, we will be continually sharing open source programs that meet various needs in the future.