By storing (defining) processing rules of tokens in a blockchain without needing to build a dedicated server for managing tokens and employing an administrator, it is possible to issue tokens and register shops as point service participants on the blockchain.
By using this open source program, it becomes possible to utilize a token – for regional revitalization – as a “regional point” that can limit the scope of use to affiliated stores participating in local communities such as municipalities and shopping districts.
(Each GMO Blockchain OSS program is built using Z.com Cloud Blockchain.)

(* 1) Blockchain technology records and holds data distributed on multiple computers, and makes data fraud extremely unlikely.
(* 2) A token is a digital asset that can be issued independently. By providing actual associated value, tokens may assume roles such as purchase points or regional currencies. 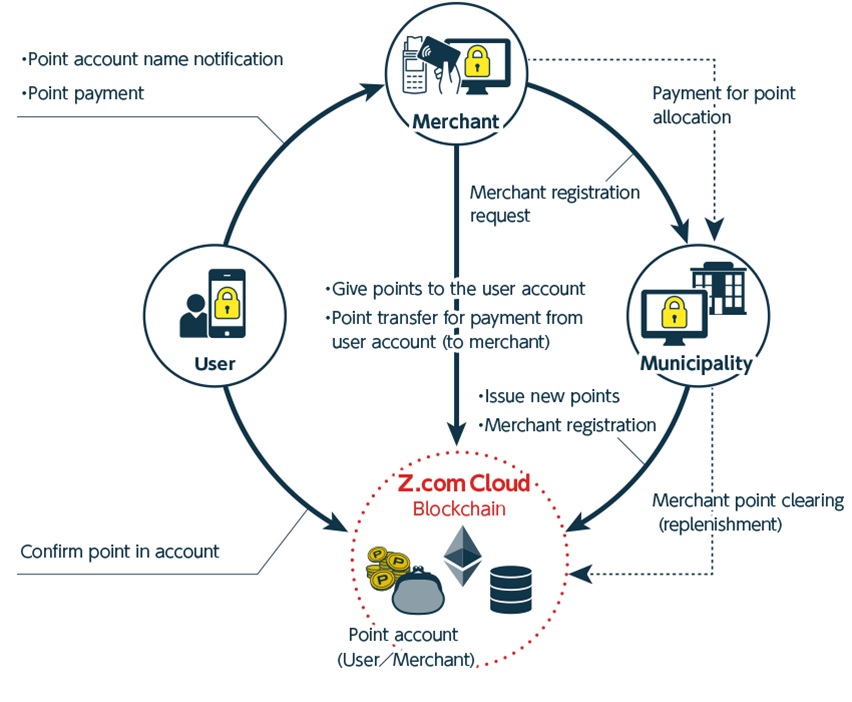 (* 3) This is an example of operation when “Regional Points” are issued with Region Tokens. When actually utilized as a point system, an application for users and a mechanism to read devices at stores are required.

【How the Region Token works】

■Open source public page
URL：https://guide.blockchain.z.com/docs/oss/region-token/
Usually for enterprises to operate their own point service, it is necessary to build highly dedicated servers that can withstand complicated processing necessary for construction and operation of point systems, point distribution management, and maintenance. Also, contractor services are usually required. However, if commissioned to such contractor services, in addition to the costs of server and database, various operational costs are incurred, including labor costs, management costs, etc.

The Region Token which is made open source at this time is a token program which runs on the Ethereum environment (* 4). By using this program, municipalities and enterprises can easily issue and operate tokens that act as points that can be used within merchant's affiliated stores. On the blockchain, since process is automated according to prescribed open logic, it is possible to construct an autonomous and permanent point system that incurs only the recording processing cost.

At GMO Internet, we are taking advantage of know-how garnered through working in Internet infrastructure services for more than 20 years. We are currently developing new blockchain based technologies. As part of this, in December 2016 we began offering beta versions of Z.com Cloud Blockchain and ConoHa blockchain services. These can be easily used to build distributed blockchain applications. Such as the Z.com Cloud Blockchain based Home Delivery Box, which has already been developed.
Based on the knowledge gained through such work, in July 2017, GMO Internet launched GMO Blockchain OSS, an open-source project enabling real service deployments. Our aim is to foster and disseminate new services based on blockchain technology.
Under GMO Blockchain OSS, we will be continually sharing open source programs that meet various needs in the future.